As you may be aware, I have been dealing with a little bout of blogger block.  My days just haven’t been as dramatic as normal.  Maybe, at 32, I am finally getting it together.  But I doubt it.  But I’ve taken up a new hobby… cooking.  My mother is terrified, she believes me totally incapable of functioning in a kitchen.

But I’m not half bad at it.  I found the ice cream maker that Elizabeth and Eric got me and I’ve made Pumpkin Ice Cream, Cinnamon Ice Cream, and Peanut Butter Ice Cream.  I am gonna try to figure out Rainbow Sherbert to take home to Marla for Thanksgiving.  And next weekend I am going to try to master my mom’s dressing for our church Thanksgiving.  And then I am going to make a Christmas Duck!  But there is one dish I am terrified to attempt…. French Onion Soup.

A couple years back I went on a quest for the best French Onion Soup.  I was travelling a ton, so this wasn’t that difficult.  The Palace Hotel in New York has the best hotel French Onion Soup, though the Hyatt in San Antonio wasn’t that bad either.  The Majestic in Kansas City’s is pretty decent.  La Madeleine’s is crap compared to the ones I tried.  I can’t really explain it but I was obsessed with French Onion Soup.  I had it everyday… for months. Maybe because I knew it was safe at every hotel or maybe its the fact that comes with melted cheese on top.  I don’t have the answers.  I just know I freaking love French Onion Soup.

So my friend David… serious David for those that were at the Bubble… he researched the French Onion Soup in NYC and when I came up for a visit… we had LA BONNE SOUP.  This place was crazy delicious.  The picture above is a whole bunch of soups just waiting to be eaten.  It was such a fun night and by far the winner of the Best French Onion Soup, EVER.

I took out the back portion of the booth we were sitting in and made everyone sign it. So if you are ever in New York City, go to La Bonne Soup on 55th and 5th… ask for the back room and if you remove the booth back in the near corner… we’re all there… Jeorjie, David, Yvette, Sherry and Steve.  I think that was the last bowl of French Onion soup I’ve had. 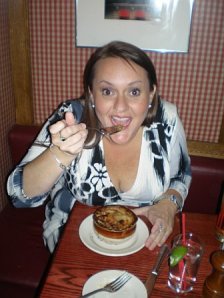 So French Onion Soup holds a mystic place in my heart.  Its the pinnacle of soups.  If I make it and its not as good and the night isn’t  as much fun as that blistery March night… will French Onion soup be ruined for me?

I can’t imagine it’d be that hard, onions, broth, and some cheese.  Dude, I wonder if you melt the cheese with a blow torch thing.  MOM – I need a blow torch and a rolling pin now.  Anyway, I’m gonna work on dressing, then a duck and maybe some French Onion Soup.  Oh, and the sherbert for Marla.