Today I asked myself a very serious question.  The conversation in my head went something like this:

Good Me:  Your friends are creative and probably hate seeing so many pictures of the twinnies, so accept and love all the Elf photos you see daily.  Embrace how fun and clever everyone is.

Bad Me: That Elf is a douche and he is effing everywhere.

I guess what I really need to know is this… are we doing it for the kids?  Are they really better because of the elf? Do people post pictures in some kind of suburban motherhood competition? Or are the pictures benevolent… like a reminder to all your friends that they need to move the damn elf.

But I also need to know how you explain that the Elf not only lives at the North Pole but also at Barnes and Noble.  Don’t kids figure these things out?  I mean I don’t know how it works with kids old enough to understand words…. I mostly deal with 13 month olds.  Is the elf another vicious lie we tell to children that will ultimately result in tears and feelings of betrayal when they find out he isn’t real? 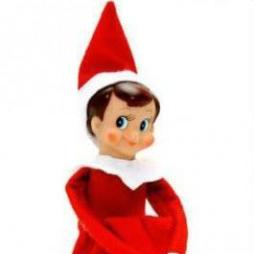 Mostly, I need to know if I am a strong enough person to take 22 more days of this elf moving all around people’s houses… competing with other action figures, fighting with batman, making snow angels, eating all the cereal…

And its not the facebook posts that are getting to me.  Honestly, it is not. The damn elf is everywhere… he’s invaded my pinterest feed, my facebook feed, and if I tweeted or instragrammed or snapchatted or whatever… I bet he’d be there, too.  He is in the mall, on amazon, in bookstores, coffee shops, Walgreens, CVS, …what have you.  Who thought this up?  What evil person decided this was a good idea?  And why have we all bought into it? I thought I’d get this all out now, early on, so it doesn’t build up into a full on rant.

Granted, I know I’ll feel totally different in a year when I tell the twins about how their elf came down especially for them from the North Pole.  And then post a photo of it on facebook.

So, Merry Christmas to all the elves on the shelves across America and may the good Lord help me find a place in my heart to love them all.