I already shared with you why I marched, so I won’t go into all that but I thought I’d share a little about my first experience with activism. This is my story:

Saturday started at 3:45 am when I arose all bright-eyed and bushy tailed to pack up the last of my stuff and hit the road by 4 am.  I left my house at 3:57 am – since doing anything early is new for me so this was kind of a big deal.

It was foggy and overcast the whole drive, but I found it peaceful to drive I35 when it was quiet and, well, empty.  I stopped in Hillsboro at 5:11 am to have my first awesome experience of the day.  I was wearing my HRC “Love Trumps Hate” t-shirt.  Now, in all honesty I walked-in and kind of crossed my arms over the shirt as I didn’t know how HRC would be received in Hillsboro.  As I walked up the counter the barista, Diane, said “I love your shirt!” To which I excitedly replied “Thank you! I’m headed to Austin to march.”

Diane literally cheered for me! She was so excited.  We chatted a bit and when I told her that I had looked for a LGBT channel to put my TV on during the inauguration but couldn’t find one – so I chose BET -she rewarded me with a hearty laugh and said “I’m buying your coffee today!”

I left feeling even more excited about what lay ahead.  I arrived in Austin by 7:50 am and woke Mrs. Gentry up – we had breakfast, coffee and talked.  She has so inspired me to get involved and make my voice heard!  If I use even half as much energy toward activism as she does – I’ll be proud of myself.  She’s an amazing example – though she’s always been an awesome example throughout my life.  Jordan arrived and things started getting busy.  Luckily, her sister-in-law works downtown so we used her as our driver and took advantage of a close parking spot. 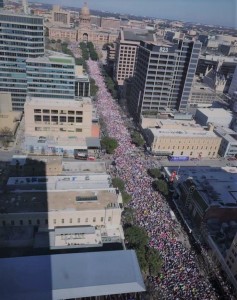 This is when it starts to get tough for me.  Oh, the crowds of people.  We walked to the capital with others and cheered and took a million selfies and pictures for others.  Then it started clogging up.  We shuffled into the throngs of people – they kind of corralled people into three groups – central, east and west on the Capitol grounds.  A band somewhere drummed.  Drummed repeatedly.  The same beat.  The same beat repeatedly.  They just kept drumming. Repeatedly. Drumming.

Periodically people cheered.  We spent the time cheering with others, reading and admiring people’s signs.  I used my sign to block the sun beating down on me – but I got freckles anyway.

I took a pill.

Just then Mrs. Gentry gave me my favorite quote of the day which still makes me laugh.  She pointed to a sign and said “That’s my favorite sign so far!”  — It was literally a traffic sign that said

“LEFT TURN ONLY”… Jordan and I looked at each other and then looked at her to say “Ummmm, that’ an actual traffic sign.”

She responded “Yes, I know but I like the message – we should all go LEFT.”

Eventually all three corrals started to move and merge.  I am sad to report that the life-long professional event manager in me reared her ugly head and I became very judgemental and started telling Jordan all the things that they were doing wrong.  I’m quite lucky that she’s know me for 900% of my life and already knew this was coming.  She just laughed.

My first ever protest march actually started as more of a shuffle.  As the crowds merged and moved onto Congress … it was just a mob of women and men who were chanting, cheering, fighting for stroller space and taking pictures.  I got about 100 feet onto Congress and started looking for places to bail.  I could cheer and wave my sign from the side, right?  About the time I decided to protest from the patio bar above the Intercontinental the mob started to spread out.  I got some breathing room and could maneuver more easily into open spaces.  I started to pay more attention to what people were chanting and what all the signs in the crowd of marchers and the crowds along the street said.

There were definitely some that were heavily Anti-Trump and I expected that – but mostly people were focused on the issue that was most personal to them.  Things ranged from Planned Parenthood, Healthcare and equal pay to representation in government offices, and pro-choice support.  The crowd had a significant display of pussy-hats… pink knitted cat ear hats.  Made me wish I knitted.

There was a white man in his 50s with a sign that said “Old White Dude that does NOT support Trump.” – I liked him immediately.

What struck me the most was that no one was fighting or arguing or spewing venomous rhetoric.  Just walking together, cheering together and raising our voices for what was important to each of us.  At that moment I realized what was important to me was finding a place to pee.  It was REALLY important to me.  So I ran into Gloria’s on 6th.  Then I knew that the best way I could support the group I was with was to save us a table before the crowd got there after the march.  So I decided to sacrifice and do this important work.  The mojitos were just a bonus.

As I sat sipping my strawberry mojito watching the crowds go by, I got to thinking about what the point of all this was. For me, it was to show that I’ll not stand idly by while leaders disparage women.  But for each person there were other reasons – other things that mattered to them.  Like Jordan, who marched for healthcare – who will not stay silent only to see her sweet son, Charlie suffer without coverage for his type 1 diabetes because our government repealed healthcare that allows for pre-existing conditions.  Or the mothers marching so that their daughters can believe in their future opportunity to live in the White House.  Or the men that marched along side loved ones because they don’t believe women they care about are less than anyone else. Or the retiree who said “I can’t believe I still have to do this!” The muslim carrying the beautiful image of a woman wearing her American flag hijab.

What I came to realize is that this wasn’t about one issue, one cause or one candidate.  This was about raising voices.  No one fought if you differed from them – this was respecting each others’ views and values.  I’m so glad these marches became one of the largest ever showing of activism – not just in the US but across the globe.

One of the most important realizations for me is that– I am on fire.  I am ready to take action – I just know that action really cannot be marching in a crowd of people. I’m so thrilled that the Women’s March organizers have launched the ten actions–100 days initiative. To keep the movement strong, they are suggesting 10 actions we can each take to share our voice.  So whether you share my politics or not, I think its a great way to engage.

You can sign up to get notified about each action here. I hope each of you that reads this blog or who share in my enthusiasm for change will participate.

I’ll leave with a sentiment my Facebook friend Matt Hammer shared… he said:

“No woman is a disgrace that didn’t march… only those that degrade the ones who did.”

Thank you to those that cheered me on, liked all my posts, asked me about the experience and generally helped me go far outside my comfort zone.  I know many that supported me don’t support my views – so it meant that much more to have your encouragement.

Finally, to those of you that say the protest wasn’t necessary, a waste of resources or that you aren’t repressed:

Thank the good Lord above you can say that.  There are so many women who can’t say it.  I’d challenge you to think about how you got to this place – where you can own your home, have your own credit card or bank account, how you got to $.78 on the dollar versus $.50 on the dollar, how you have equal access to education, and finally how you arrived at a society that listens to your voice.  I’m pretty sure I got here on the backs on the women that spoke up before me.  The women that did not stand idly by and accept things they way they are.  Not everyone agreed with them either – yet here we are – better for their efforts.

This wasn’t about liberal, left, or anti-Trump sentiments… though those were very prevalent… this was about a realization that we clearly weren’t speaking loudly enough through the election cycle about what was most important to us.  I believe if we had been we might have had better candidates to choose from.  This march, for me, is the beginning of taking action behind my beliefs instead of assuming others will say what I think needs to be said.  So, if you have something to say – speak up. Stand up. Write your senators. Annoy your friends on Facebook.  This march was about doing something.

Over 5 million women, men and children across the globe marched because they can.  I was one of them.

4 thoughts on “What I Learned”